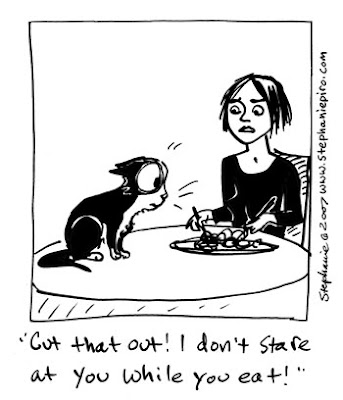 Stephaine Piro is queen of the cat cartoons and the Saturday Chick in King Feature’s SIX CHIX daily strip.

Her work is instantly recognizable and appears in books, on T-shirts, greeting cards, and magazines, and, it is rumored, tattooed discreetly on some of her more ardent fans.

Read SIX CHIX daily and be sure to check out all the cartoon goodness at Stephanie's website.

Always. Cartoons and comics were always around, growing up. Big collections of NYer cartoons, Charles Addams. I loved Bambi and 101 Dalmatians. My first dream was to be a Disney animator, but later I fell in love with PEANUTS and Ronald Searle.

It took a while. Well, actually, I sold cartoons to card and calendar companies before I sold one to a publication. Glamour was the first to buy one from me.

3. How did you get involved with the SIX CHIX strip?

Jay Kennedy contacted me, when he noticed FAIR GAME hadn't been renewed by Universal, who had bought it from Chronicle Features. Jay was really a visionary. I was really excited by his concept, and I knew Rina Piccolo and Isabella Bannerman and Kathryn Lemieux's work from our being published in Roz Warren's Women's Glibber series. Margaret Shulock and Ann Telnaes's work were new to me at the time and I thought they were both amazing.

4. You also do gag cartoons. How does that differ from your work on the strip?

I love the punch of a panel. To me, strips were always character driven. For SIX CHIX, we do our work as both a panel and a strip. Another of Jay's great ideas. It was tricky to try to pad a panel to a strip length, so, I switched to drawing the strip first, and then breaking up the panel to tell the story, something Kathryn Lemieux excelled at, so I learned from her that that was an acceptable technique.

Waaay back, I did a strip called THE TERRIBLE TEA TIME about two nameless women who lived in a post-apocalyptic society. That had an unseen maid and a cat and dated a lot of unsuitable men. I consider it my greatest work as it was just the kind of thing I'D read if it were in print. It was roundly rejected (one rejection said "Very smart and sexy. Just not for us"), but championed by Joe Bob Briggs. I used to sell a collection at craft shows.

As a print person, I have a deep affection for cartoons and comics in print, but you can't deny there's a lot of innovation and great work being done on the web.

7. Newspaper comics are considered pretty tame compared to TV and other media. Do you find this limiting or is it a welcome challenge?

I write first. I write and write, then have to stop and draw up everything. Though, sometimes I just draw up an idea when it comes to me.

Ack! I hate to even think that way. I never think about that. I believe there are always ideas out there.

You have to have talent. It can be rough, but it's got to be there to get noticed. You can persevere forever, but it may not get you anywhere without your own style, voice or insight.

I loved Stuart Dodds, my editor at Chronicle Features. He was very hands on. As was Jay Kennedy, when the CHIX got started, but once you know what you're doing, it's great to have the freedom to create and just send it in.

14. What are your favorite books, TV shows, songs
and films? (Yes, that counts as one question.)

Oh no! It's almost impossible to narrow down I have so many favorites in every possible medium.

With TV, as soon as I like something it's inevitably canceled (except Lost!). Currently, I'm in love with No. 1 Ladies Detective Agency. I've read all the books and seeing the characters brought to life and that music, it's just beautiful. A friend also gave me Joan of Arcadia, which I'd never seen, and I love the teen cast, funny, smart, heartbreaking.

Books, so many. I did enjoy Jonathan Strange and Mr. Norell and Gordon Dahlquist's Glass Books of the Dream Eaters.

Music, I am crazy about Canadian singer/songwriters David Francey and Geoff Berner. Lately I like Conor Oberst, too. I adore listening to Pandora on the computer while I work.

Movies, also, waaay too many. The Good Baby, I'm Not Scared, Sliding Doors, Duets, Wisconsin Death Trip, and Moby Dick (w Gregory Peck) are all ones I can see over and over.

I use a Koh-i-noor art pen.

Creating your own little world and bringing it to life.

Meeting Lynda Barry, Mort Drucker and Jules Feiffer were big moments. All at the Reubens.

These days? Cartoon because you love it, because you can't NOT do it. And submit, submit, submit. If you have talent, someone will notice, eventually. But, if you're looking to make money, become a doctor or a lawyer.

I've won a couple for different things. It hasn't made for great leaps in income.
I doubt I'll ever get a Reuben, so I'm not sure if that boosts your sales presence.

In the 80's, I once made a classic cult film (though still unedited) called Invasion of the Zucchini People. The stars had to hold zucchini on sticks over their heads with Mr. Potato Head faces.
Posted by Scott Nickel at 10:56 PM

I like that interview. Stephanie also does fabulous owls and other animals...they all have those expressions, like her people. She's a great cartoonist.

Stephanie is a great artist; in my book she's the queen of the quick and lovely line! But her best quality is her kind and generous heart.

I'd love to interview you! Rina Piccolo just sent in her 20 Questions, and Benita's will run soon.

Hi Scott
I am game, indeed! I"m thrilled to be included with my pals Stephanie and Rina.
Margaret

This was one of the most thoughtful interviews I've done. Thank you for including me! And thanks to everyone for their kind comments!

It looks like you will be interviewing Margaret, and you already did Benita and Rina. If you do Anne and Isabella, it would be a wonderful addition to the Chix blog via a link!!!