To newspaper comics fans, Stephan Pastis, the creator of the popular strip PEARLS BEFORE SWINE, needs no introduction.

PBS, which features Rat and Pig, is a certified hit. Syndicated in 600 papers, the strip has spawned numerous best-selling compilation books. Here’s hoping it becomes a licensing bonanza, too. I’d love to have a little plush Rat suction-cupped to my car window.

Stephan was gracious enough to answer my questions via phone a few weeks back, especially so because my cheap microphone/headphone setup made it difficult for him to hear me (curse you, Best Buy!).

Nominated four times for best newspaper comic strip by the National Cartoonist Society, Pearls has won the award twice, in 2003 and 2006.

My favorite PBS strips are from the weeklong arc in June 2005 featuring Osama Bin Laden and the Family Circus. Truly inspired!

Check out PBS daily, buy the books, read more about Stephan at his web site, and follow his blog, which is updated far more freq 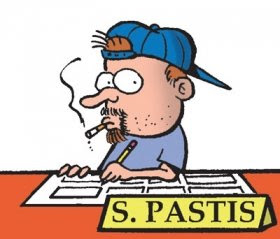 uently (and humorously) than this one .

Oh, yes. When I came home from school, my mom would provide me with paper and it gave me something to do.

I submitted a cartoon when I was 11 to the Pasadena Star News for the little children’s section of the comics page. They bought it and they paid me two dollars.

3. Describe the process you went through to get PEARLS BEFORE SWINE syndicated.

I submitted three different strips to the syndicates, maybe four, before PEARLS. They rejected all of them. And then I submitted PEARLS in 1999 and both United and King were interested and I went with United. Then Scott Adams endorsed the strip and told all his fans to read it. And that’s when it sort of took off.

Maybe I should use that Johnny Cash answer. When people asked, "Why do you wear black?" Johnny said, "When the world’s a better place, I’ll stop wearing black." Maybe that’s the answer.

I once had Rat and Pig at a funeral, and they had the giggles. Rat was trying to make Pig stop giggling, so he said the name of a comic strip and immediately everyone stopped laughing. The implication being that the comic was so unfunny, it could actually make people stop laughing. No I can’t tell you the name of the strip, but that’s why they nixed it. They said, "Oh, the creator is such a nice guy, you’d really hurt his feelings."

I think it’s an artificial distinction. To me there are two kinds of strips: funny strips and not-funny strips. I don’t really care how it gets transmitted to the world; I lump them into those two categories.

I think the challenge probably makes you a better writer, but it’s very limiting. I would much rather have the whole keyboard of comedy open to me rather than just the black notes on the piano. It’s like we have just one set of keys and everyone else gets the whole keyboard. So sure, that’s limiting.

THE FAR SIDE, 1960s-era PEANUTS, GET FUZZY, DILBERT, PERRY BIBLE FELLOWSHIP — that’s a great one.

9. Do you think Ziggy shaves his head or was he born without hair?

Sometimes pictures, but almost always words. I’m much more a verbal cartoonist than a visual one – out of necessity.

No, I really don’t. I mean there are days when I don’t have anything, but there’s always stuff to make fun of. And if there’s not, I’ll just do a FAMILY CIRCUS joke.

12. Who do you want to play YOU in the PEARLS BEFORE SWINE live-action film?

Oh, I think there’s only one person who could play me: Brad Pitt.

None, so I guess that would be laissez-faire.

Books: Confederacy of Dunces by John Kennedy O’Toole, funniest book ever. Then the ones I re-read every couple of years…Death of a Salesman, Fear and Loathing in Las Vegas, The Great Gatsby, and Hemingway’s short stories.

TV: The British version of The Office, the other Ricky Gervais show, Extras, Curb Your Enthusiasm, Flight of the Concords.

Songs: I’m a big U2 fan with my favorite song ever being "Bad" from the Unforgettable Fire.

Films: Kill Bill is probably my favorite single film, followed closely by 8 ½ by Fellini, Ran by Kurosawa, and Lawrence of Arabia.

Physically how I create the strip? A pen and paper. Does anyone really care about this stuff? (laughing) Does anyone really care what type of pen I use? I’ll tell ‘em. It’s a Kuretake pen and just Strathmore Bristol board. I’m very simple. If you looked at my desk you’d see pen, pencil, eraser, and paper. I use the computer to clean up the strips and add the grayscale.

Well, I didn’t like being an attorney, so I’ll say that.

I‘ve been really lucky there. Schulz, just by stalking him and showing up where he ate breakfast; Berke Breathed, just by being on a panel with him in New Orleans; Scott Adams, because he lives not too far from me. Never met Watterson; never met Larson. I would love to meet Larson. Two people on earth I want to meet more than anybody else: I want to meet Bob Dylan and Gary Larson, neither of which will probably ever happen, but a man can dream.

Entertain yourself. Sounds ridiculously simple, but it’s much harder than it looks. You think you are, but more often than not, you’re playing to an audience, trying to entertain others. When you try to do that, you entertain no one. Just try and make yourself laugh. I once asked Scott Adams that question. I said, "You’re so funny when you write; how do you do that?" He said, "I write to my brother. I imagine my brother reading it."

When I lose, not very important. When I win, they’re everything.

I’m afraid of dogs. If there’s a barking dog in someone’s house, I won’t visit them. That’s the first question I ask. When someone invites me over I ask, "Do you have a dog?" If they say, "Yeah," I don’t go.
Posted by Scott Nickel at 8:42 PM

Great interview! PBS is a fantastic comic strip I enjoy, so a little "inside scoop" was nice to read.

This is the best and funniest strip I have ever read. I strongly encourage anyone who has not read PBS to read it.

"17. Have you met any of your cartoonist idols? Under what circumstances?

I‘ve been really lucky there. Schulz, just by stalking him and showing up where he ate breakfast; Berke Breathed, just by being on a panel with him in New Orleans; Scott Adams, because he lives not too far from me. Never met Watterson; never met Larson. I would love to meet Larson. Two people on earth I want to meet more than anybody else: I want to meet Bob Dylan and Gary Larson, neither of which will probably ever happen, but a man can dream."

How did you meet Schulz? Please share that story if you have the time. Also, I couldn't agree with you more about Bob Dylan & Gary Larson.

You really crack me up. It's like reading the voices in my own head a lot of the time. In other words - you make me feel sane. Thank you.