Let the revelry (or the apathy) begin!

Down with Comics Sherpa!
All hail Humorous Maximus!
All hail hyperlinks!

I have used the bathroom in the homes of these comic-strip luminaries:
Jim Davis
Cathy Guisewite

That's all I have today. Carry on.
Posted by Scott Nickel at 5:15 PM No comments:

It's Good to Be King 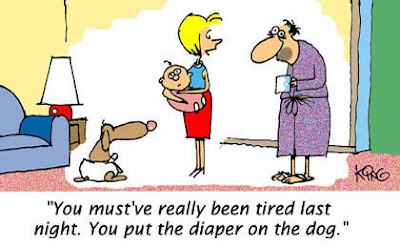 I got a call Sunday morning from cartoonist Jerry King. I’d made an inquiry to the Humorous Maximus website (run by Jerry and fellow cartoonist Dan Thompson) about using some of my cartoons. Jerry called to let me know they were interested in my work and we had a really nice (long) chat.

I’d never met Jerry before Sunday, but I’d admired his work for years. I first noticed his greeting card gags back in the late 1980s when I was submitting card concepts to West Graphics, now owned by Kalan. And Jerry’s only gotten better. His style is immediately recognizable and the best thing about his work is its immediacy, simplicity, and the fact that it’s just so damn funny. Jerry King draws funny. Even before you read the caption, you start to smile because the way he draws makes you laugh.

Check out Jerry’s cartoons at his site and on Humorous Maximus:
http://www.jerryking.com/
http://www.humorousmaximus.com

Jerry is a pioneer in online cartooning and supplies material to a large number of website clients, in addition to his print customers. He’s also a regular contributor to Playboy, the Holy Grail of cartoon markets (along with The New Yorker).

Speaking of Playboy, Jerry offered an amusing anecdote. I’d read that Hugh Hefner used to personally choose the cartoons for the magazine, and apparently that’s still the case. He puts his initials on each rough he approves and it’s sent back to the cartoonist with a request for finished art. I wonder if each month’s playmate also gets an "HH" written on her shapely derrière once she’s been okayed by the boss.

Here’s my own Hefner anecdote, and it’s not nearly as cool as Jerry’s, but it is sort of funny.

My mom’s second husband, Keith, grew up in Illinois and he and his brother knew Hefner in the early 1950s. Hef had published a book of cartoons titled That Toddlin’ Town, but his real dream was to start a magazine. He was looking for investors and needed about a $1000 per person.

Now a thousand bucks was a lot of money back then, but not an insurmountable sum. Keith’s brother scraped together his grand, but Keith was reluctant. He didn’t think it was a particularly sound investment, so he passed. I’m sure you know what magazine Hefner ended up publishing.
Keith’s brother made a (not so) small fortune from his initial investment and, as a perk, got to ride on the Playboy jet and go to the Playboy clubs.

What did Keith get? A free subscription to Playboy, which I imagine his brother wrangled for him.

And there you have it. The story of the only guy in history who had the chance to invest in Playboy and DIDN’T.
Posted by Scott Nickel at 12:15 AM No comments:

Well it looks like this little freak show has been yanked. I can't really blame the network. I think they finally realized that the show was as boring as Muncie itself.

From The Futon Critic (linked from TV.com):

LOS ANGELES (thefutoncritic.com) -- CBS is putting "Armed & Famous" on the shelf as the network has pulled the series from its schedule effective immediately.
Repeats of "CSI: NY" ("Risk") and "Criminal Minds" (presumably an encore of its Super Bowl episode) will fill the Wednesday, 8:00/7:00c hour on January 31 and February 7 respectively until "Jericho" returns on February 14.
"Armed's" most recent airing drew a 1.4 rating among adults 18-49 (according to Nielsen's fast national data), barely edging out the CW's "Beauty and the Geek" (1.3 rating) for fourth place in its time slot. Said number was also less than half of its premiere audience on January 10 (2.9 rating).
It's not clear when or if the Eye plans to burn off the three remaining episodes of the series.

What will become of international television icon, Eric Estrada?
Posted by Scott Nickel at 6:50 PM No comments:

The Flying McCoys, by Glenn and Gary McCoy is a consistently funny feature. I don't know Gary or Glenn, but my Triple Take partner, Todd Clark, does, and he's always slipping Gary or Glenn's name into our strip, so I figure they must be cool guys. Or maybe they have Todd under some sort of evil mind control.
I'm absolutely amazed at how prolific Glenn is. Not only does he handle half of the Flying panels, he does the Duplex strip, editorial cartoons, greeting cards and magazine cartoons. He probably volunteers his time at hospices and reads to elderly shut-ins too.
Glenn and Gary, if you're reading this, keep up the great work.
And how about mentioning MY name in your @#&%! strip once and awhile?
Posted by Scott Nickel at 6:38 PM No comments:

I have vivid memories of being 14 years old and watching the show in Southern California each weeknight at 11 p.m. on KTTV channel 11. I'd gotten hooked on "Mary Hartman, Mary Hartman" (Norman Lear's soap opera parody) and continued watching when "Fernwood" took over the time slot as a summer replacement. OK I admit it. I was a weird 14-year-old.

But what a show it was! Martin Mull was hilarious as sleazy, self-absorbed Barth Gimble (twin brother of the deceased Garth Gimble from MH2). And Fred Willard as his dimwitted second banana, Jerry Hubbard, was pure comedy gold. Jim Varney, Kenneth Mars, and Bill Kirchenbauer made regular appearances as local characters, and Tom Waits even guested once as himself.

I only saw the show during its initial run, but it's really stayed with me. After recently trading for the complete run of "WKRP in Cincinnati" on DVD (another comedy classic), I started on a new mission: the complete "Fernwood 2Night" (and "America 2Night," the "spin-off" in which Barth and Jerry moved the show to Alta Coma, California, "the unfinished furniture capital of the world") .

So far I've found a source for about 48 episodes of "Fernwood," which, as of this writing, I've yet to see. I have a few leads on a complete set, and I hope those pan out.

In related news, "Mary Hartman, Mary Hartman" is coming to DVD, with the first disc releasing this spring.

I've always been a big fan of the comic strip ZITS. It's written by the always funny Jerry Scott and drawn by the always amazing Jim Borgman. Scott's jokes are fresh, funny, and insightful, and Borgman's artwork is inspired and inspiring. He's the master of body language, line work and characterization, and if it were biologically possible, I'd bear his children (natural labor, too; no C-section for me.)

Here's today's strip, but I could put up any day's offering. They're all good. And I mean all.

The Armpit of America

Actually I don’t live in the armpit of America. I think that’s Cleveland (or maybe New Jersey?). Muncie, Indiana, is more like the elbow of America; the dull, nondescript elbow.

The only exciting thing to happen to this town in years is the CBS reality show, “Armed & Famous,” which was filmed here this past fall.

For the uninitiated, A&F takes 5 “celebrities” – Eric Estrada, La Toya Jackson, Jack Osbourne, Trish Stratus (who?) , and Jason “Wee Man” Acuna (from “Jackass”) – and puts them on the mean streets of Muncie as reserve police officers. It’s a ridiculous show, but it’s cool to see the sights, sounds, and streets of my adopted hometown on national TV.

The show mostly centers around the crack- and white-trash-ridden “south side” of town. I live in the boring crack-free suburbs north of the city.

What I learned from the show: There are crack whores in Muncie who will give you a b.j. for $20. Cool!
Posted by Scott Nickel at 12:58 PM No comments:

This is my first post on my first blog ever. It's not quite what I expected. I feel excited yet a little let down. I may need a moment. Someone hold me.
Posted by Scott Nickel at 11:10 AM 1 comment: