Michael Jantze, creator of the comic strip THE NORM, has pretty much done it all in the cartooning biz: comic strips, graphic novels, online comics, illustration, animation, teaching — and rumor has it that he was the inspiration for Bucky the cat in GET FUZZY.

I’ve long admired Michael’s work. I saw his cartooning in the early 1990s and recognized his talent immediately. Luckily others more important than me did too, and the rest, as they say, is history

For the full Michael Jantze experience, including awesome animation and a plethora of publishing, check out his wondrous website! That’s an order, True Believer! (Why am I suddenly writing like Stan Lee?)

Yes. I was "that" kid who could draw.

High school, I think. I won a local contest for a print ad I designed through a school competition and got to stay on. It was a record store in Normal, IL and Champagne, IL. I drew the mascot for more than five years. 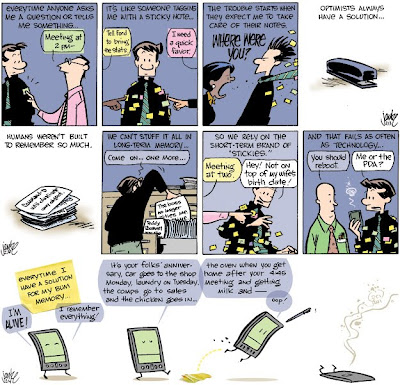 3. Describe the process you went through to get THE NORM syndicated.

I was working at a paper in Marin County as the senior graphic artist. I asked the editor if he'd make space for me on the comics page. I wanted to run it six days a week to “smooth off the edges” and get it in shape for syndication. The strip ran there for six months before I submitted to three syndicates. I got two contracts and chose King Features.

4. You took THE NORM online, initially offering it as a subscription-based feature. What did you learn from the experience? Is it a viable business model for comics?

It is viable. I know it helped that I had 8 years of emails in the mailing list to rally. And being syndicated offered wonderful credentials to the press as I tried it out. It's funny to see Kickstarter doing what we did in 2005, using crowd-sourcing to set it up. And my wife raised a lot of money...she more than doubled my syndicate income for the coming year. But to be honest, I got about six months into drawing the strip daily and had the thought “I'm still doing this daily? What was wrong with the newspaper income?”

So I decided to try writing a graphic novel-style book for the following year to do something that you could only do on the Web. My wife was diagnosed with breast cancer that year so I shut it all down. Four years later, I'm finally editing the book. I'm not sure what to do with it next, though.

As for sub-based sites, no, I don't know if they can sustain themselves as a business model for everyone. I teach a business class at Savannah College of Art and Design on new media and Web-initiated cartoons and I'm not sure that even the kind of cartoon sites that are working today will be around in five years. I think social media is so powerful that cartoonists and businesses will have to adapt to where the readers go. 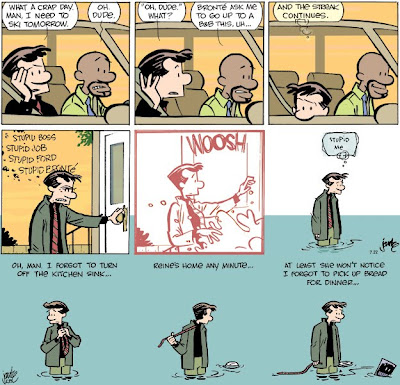 It's the one that showed up in a syndicated comic strip about three months after I had submitted it to a syndicate. I had submitted to one of the syndicates in the early 1990's, and their comics editor was a cartoonist who wrote for one of the “big” strips. My gag showed up panel for panel, nearly word for word in a Sunday strip. I remember standing on the front porch of my house in L.A. realizing the cartoon world is just as desperate as Hollywood and Madison Avenue. And no, I didn't get a check for my work.

Erase the adjectives. They're comics, period. The only comics I discriminate against are awful comics. You can find a fistful in both categories. 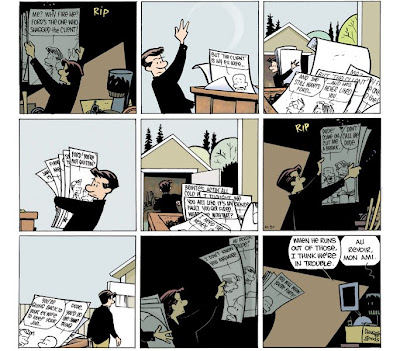 7. Tell us about Jantze Studios and your animation work.

I've worked with Jerry Scott, Rick Kirkman and Jim Borgman (and King Features) in the past two years developing some new projects to take advantage of the strength of comic -strip characters in new media markets. And of course, there's “Mr. Lux,” an original character created for LXR Resorts and Hotels (now Hilton Hotels) and the YouTube Bears short. We created these characters to help these companies talk to their audience in a fun way. 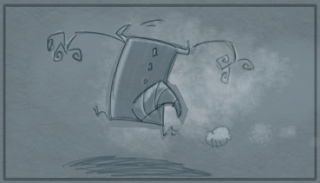 9. Who’s hotter, Sally Forth or Blondie?

You're kidding, right? Sally's a hag...but Blondie is like Goldie Hawn and Meryl Streep in Death Becomes Her; she must be stapled and glued in place. I'll go with Daisy the dog...

Sparky taught me both at the same time. It's amazing what happens when you use the strength of the medium to its fullest.

No. I'm afraid I'm the opposite. I want to get so many stories down, I think I'm going to have to switch to a studio setting to finish any of my projects.

12. You worked at Industrial Light and Magic. Was that the coolest job in the world?

It was a riot. I learned a lot about using all the aspects of my different careers to solve visual problems. Everything except rolling burritos at Taco Bell...that superpower I saved for my wife's first pregnancy.

I worked on a variety of projects and problems. I worked with directors like Ron Howard and Joe Johnstone and Stephen Summers and learned so much about story sequencing, character development, budgeting and production...they didn't teach any of that stuff in film school.

I like the kind person that answers the phone and has their own opinion. I guess that's a hands-on editor.

Oh, boy. I like history books. I'm reading one on Willie Mays right now. I don't watch a lot of television, but I do catch "Top Gear" and "Arrested Development" on Netflix from time to time.

I like Col-erase pencils. Ink and paper. Brushes, nibs, brush pens, Microns. Whatever, I don't worry about the materials and supplies as much as that I hate starting a drawing. I do some editing on the Cintiq and love it for coloring. I have three workstations, one for editing animation, one for production and one for business. But I still have my light boxes and taboret right next to my desk.

You get to write while having breakfast and then kill an hour “doing errands” when you're really just in a bookstore or library digging through the shelves. 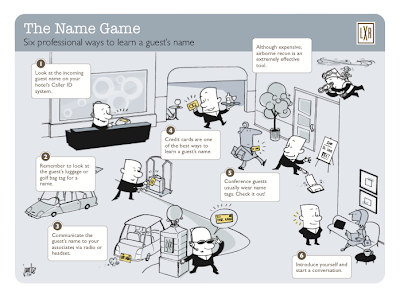 I got to know Sparky while he was still with us. I've met most at NCS events or comic cons. I got to hang out years ago with Will Eisner at a San Diego Comic Con when I was doing some work for DC. Jack Davis at an NCS event last fall. Mort Drucker and his wife shared a table with me once and we talked for an hour or so. Garry Trudeau was alone at a Reuben cocktail party, so he and I talked without interruption (I think everyone was too afraid to approach).

Don't quit. If you do anything long enough, everything happens...including success. 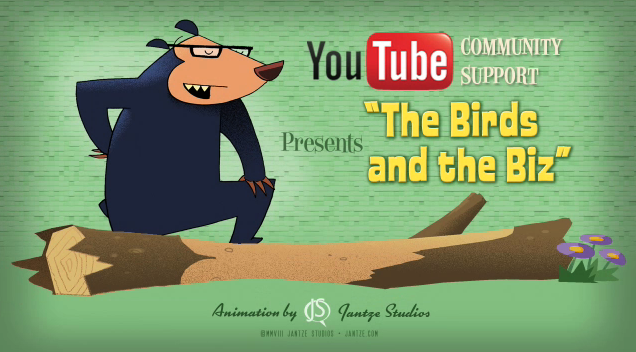 Not important at all in our business. It doesn't get you more business or a higher paycheck like, say, winning an Oscar does in the film business. But did I mention I was nominated for a ... ?

I hate balloons.
Posted by Scott Nickel at 2:29 PM

Nice interview. Super talented guy who should have a lot of stuff on TV.