The lovely and talented Benita Epstein, the Friday chick in King Feature’s SIX CHIX daily comic, has been published in hundreds of magazines, including the New Yorker, Harvard Business Review, Wall Street Journal, USA Weekend, and Reader’s Digest -- and she wields a mean table saw, too.

She’s also probably one of the only cartoonists to have studied yellow-fever mosquitoes, photosynthesis, lung surfactant, autism and purine metabolism.

Check out Benita’s website for a cornucopia of comical cartoons on everything from empowerment managing theory to genetic engineering.

I drew, but never considered cartooning as a career. My sister and I wrote these horrible cartoon books that poked fun of people we didn’t like (A Day in the Life of So-And-So). I was more interested in science and that‘s the direction I took.

Within two weeks of deciding to become a cartoonist I sold a gag cartoon to American Scientist.

3. Your cartoons have been published by all the major markets, including the cartoonist’s Holy Grail – the New Yorker? Was it tough getting in?

It’s not tough getting in. It’s tough STAYING in.

4. You have a B.S. and an M.S. in Entomology. How did that lead to a career as a cartoonist?

There’s no connection at all. After about twenty years conducting scientific and medical research, I was due for a change. I had no idea what cartooning was all about. I abruptly changed careers and was positive it would work out.

I sent this duck waiter cartoon around to several places and never sold it. I thought it was funny. Maybe too corny. I eventually used it in DRAWING A CROWD, my panel with Creators. 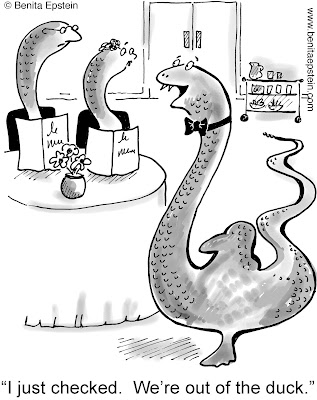 6. How important is it for a cartoonist to have a website?

A professional cartoonist absolutely needs a website or a blog or both.

7. What’s the future of gag cartooning? The Internet?

Gag cartoons in print magazines are pretty much on their way out, except a few big magazines like Reader’s Digest or the New Yorker and a few trade magazines and association publications. However, there are so many opportunities on the Internet it is staggering. People love humor no matter what form it’s in.

9. Should the Lockhorns try open marriage to spice up their relationship?

I have a vague idea of a scenario, then come words, jokes, how the caption sounds. Then comes the composition and drawing.

No. But, I worry about repeating my own ideas. I’ve done that before.

Perseverance. And for gag cartoons a real sense of what’s funny.

For assignments/commissions I like exact instructions. For my syndicated panels, Creators and King Features let me have free range (within reason).

BOOKS: The God of Small Things, A House for Mr. Biswas

It’s not so much being a cartoonist as the freelance part. I have contracts and obligations, but there’s still plenty of time to do what I want, not stay in one field or get stuck in a rut. Plus all those years of marketing myself paid off.

Get a lot of experience outside the cartoon world, travel, go to college. 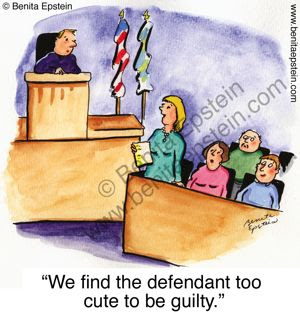 They’re important if you’re the one getting the award.

A few people know this. I have the grapheme form of synesthesia where letters and numbers are perceived as colors. Others with this are the physicist, Richard Feynman, Russian writer, Vladimir Nabokov.
Posted by Scott Nickel at 7:38 PM

It's great to see some of Benita's NOT six chix cartoons. I loved the question and the answer to the favorite rejected cartoon.