Cory Thomas is the young creator of WATCH YOUR HEAD, syndicated by the Washington Post Writers Group.

Read Cory's strip in your daily paper or online at GoComics, check out Planet Cory, and pick up the first collection of WYH strips. That's an order!

I've been "drawing" since I was, maybe, two years old. My mother would give me a pen and some paper to keep me quiet in church. I don't know why I didn't toss the paper away or try to eat the ink. I was either a well-behaved baby or afraid of my mom.

I didn't grow up with dreams of being a cartoonist, though. I had dozens of those mini-paperback comic strip collections. Peanuts, Dennis the Menace, Andy Capp, Crock, etc. But, rather than comic strips, comic books were my true love. I always imagined grown-up me penciling stuff like the Justice League or the Legion of Super-Heroes.

Then again my own self-made comics always had a comedic bent, so I probably should've seen this coming.

When I was an undergrad at Howard University, I'd look at the editorial cartoons in the school paper and silently judge them. Actually, I'd judge them out loud, but I didn't have any of those friend-people around to hear me. Despite my disdain, it never occurred to me that I could be doing that job. I didn't even have the inclination, because I never saw myself as a professional. I was just a guy that liked to draw.

Then one day, I happened upon an ad in the paper looking for a new cartoonist and I said, "why not?" Turned in my application with samples and they called me back the same day. The funny thing is that I'd probably have done it for free. 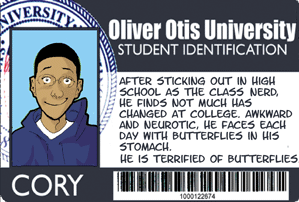 3. Describe the process you went through to get WATCH YOUR HEAD syndicated.

I always feel guilty about this story when I read about the years and years of torturous effort that so many people endure to be syndicated.

In addition to editorial work, I had a short-lived comic strip in my school paper, WATCH YOUR HEAD. Basically, the same as it is today, but with a drastically different art style. I never really tried my hand at a comic strip before, so I assumed everyone had to be drawn with childlike bodies and enormous heads.
When it came out, a couple I knew kept telling me how good they thought it was. The husband was a comic artist himself and he helped me smooth out the rough edges. But my mindset was still fixed on doing it for fun. They berated me for wasting talent and eventually convinced me to send out some samples.

A month and some rejection letters later, I got free lunch and a development offer from the WPWG. I can be easily bought with sandwiches.

4. The strip’s main character is named Cory. How much of WYH is based on you and your friends?

Not much. I was mostly a hermit in college, so there was none of that based-on-your-friends stuff. The main character was loosely based on me at first. And Robin was based on a girl I was in love with at the time. But they both evolved into their own personas. Now I just see Cory as a grown up version of the kid from the Bernie Mac show.

The other characters are based on different archetypes you’ll find at a Black college. However, like every creative work, there’s a bit of my personality in all of them. Even Jason.

This one needs some familiarity with the storyline to understand, but I'll give it a shot. Cory is secretly, hopelessly in love with Robin and convinced that they're meant to be together. But he finds out that Robin has a boyfriend and spends the weeks leading up to this strip in a miserable, self-pitying funk. Then I started the week off with this:

Which was perfectly fine (and I thought hilarious), except that I submitted it a couple of days before the Virginia Tech shootings, and, at the time, one of the speculations was that it was the work of a jilted lover. So this version of the strip never ran. I loved it, though.

It’s stupid. I’m not even sure what the argument is. 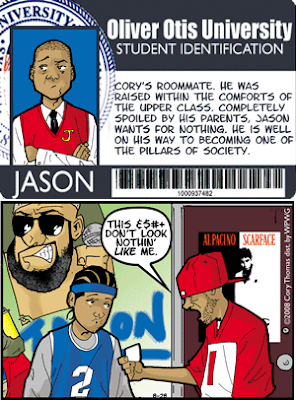 Is it about quality? Because anyone looking down on the quality of webcomics probably doesn’t read a lot of webcomics. Or newspapers for that matter. Is it the business model? Because, as someone on the lowest rungs of the syndication success ladder, I can confirm that a lot of us down here can learn a thing or twelve from those "T-shirt salesmen."

On the flip side, I’m positive that most of those artists snarkily proclaiming the death of print would make out with both their grandmothers if it meant signing a syndication deal.

Mostly the former. It’s especially frustrating when you write a comic about young adults in college. The kind of college students that say, “Gosh!” and “Heck!” and never have sex or drink. Not that I have any desire to put out 4 panels of curse-laden debauchery every day. I’d just like it if sometimes my characters were allowed to act their ages.

But, as frustrating as it is, sometimes trying to work within the limits does exercise your creative muscles. Sometimes the “clean” version turns out funnier than the original. Rarely, though.

I like way too many to choose a top five, so I’ll just name the first five that come into my head.

Cookie, hands down. I imagine Honi to be covered with a light coating of hair. Plus we already know what she’s going to look like when she gets older. Meanwhile, Cookie grows up to be Blondie.

I think in terms of story arcs, so the plot and dialog usually come first. The times I’ve tried to wrap a joke around a funny visual have mostly ended poorly.

I always have ideas. An endless stream. I just worry about finding punchlines for them.

12. Who do you want to play Quincy in the WATCH YOUR HEAD live-action film?

If Will Smith, Denzel and Morgan Freeman turn it down, I’m screwed. There are no other Black actors in Hollywood. 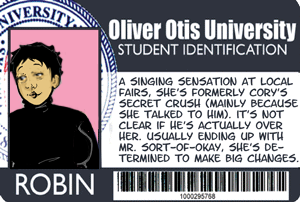 Is “in the middle” cheating? My current editors don’t stand over my shoulder, dictating every aspect of the strip, but they do show a genuine interest in what I do. Either that or they do a very good job of faking it. I appreciate knowing when I’ve done a good job or when a joke doesn’t quite work. It helps me get better.

Well, my choices in reading material haven’t progressed much beyond the Hardy Boys, so I’ll leave that out.

TV Shows: How I Met Your Mother, The Office, Criminal Minds, Law & Order: All of Them, Cold Case, The First 48 (Can you tell I like procedurals?)

Movies: Ferris Bueller’s Day Off, The In-Laws, The Fugitive, Juice

I love to draw. I love being a goofball. I love paying rent.

Nope. I’ve never even met any cartoonists that I’m ambivalent about. Did I mention that I’m largely a hermit?

Don’t pin all your hopes on syndication. The nature of the game isn’t kind to most newcomers. Diversify. And go get me coffee!

I’d love to be recognized in that way, but it isn’t what drives me.

I’m actually a team of comedy writers, Byron Cory and Thomas Ginsberg. The artwork is done by trained elephants.
Posted by Scott Nickel at 6:50 PM

Aye son...my two cents...i still have both my graduation shirts with your freestyle artwork...and i have been showing off your sh*t 4 yrs...i remember your copy book strips from way back(form1)...so dude well done! At least one of us has a talent...oh! decent interview...rasta out!