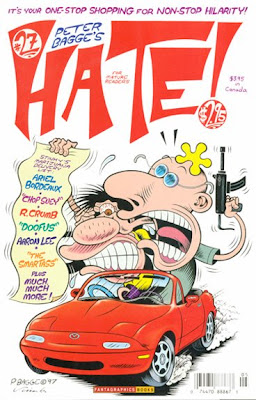 Peter Bagge is one of the best cartoonists of his generation. And that’s a natural fact.

In the mid-1980s, when Pete was still in his twenties, Robert Crumb handed over the editorial reigns of his legendary comix anthology, WEIRDO, to the young cartoonist.

At about the same time, Fantagraphics published NEAT STUFF, a hilarious alternative comics series that showcased some of Pete’s craziest and funniest characters: Girly Girl, Studs Kirby, Martini Baton, Junior, The Goon in the Moon, and, of course, Buddy Bradley and the delightfully dysfunctional Bradley clan.

Pete had Buddy leave home and move to Seattle and chronicled the slacker’s adventures in the pages of HATE, a sprawling series that epitomized the very best of 1990s alternative comics.

If you’re unfamiliar with HATE or Buddy Bradley, I won’t spoil the story for you. Get over to Amazon and load up on these essential collections.

In recent years, Pete has branched out, spoofing Marvel’s Spider-Man and Hulk, lampooning syndicated cartoonists in SWEATSHOP, chronicling the tabloid-terrific adventures of Bat Boy, exploring the end of the world in APOCALYPSE NERD, and investigating social and political issues with his always edifying "cartoonitorials" for REASON magazine. He’s also a frequent contributor to MAD.

I first encountered Pete’s work when he was editing WEIRDO, and I was hooked. (Pete also inspired my brief ’80s career as an alt-comix creator, but that’s a story for another time…)

Check out all things Bagge at his web site, including his soon-to-be released collection of REASON work. That’s an order!


1. When you were a kid, did you want to be a cartoonist? Did you draw?

I drew for as long as I can remember, but never as compulsively or diligently as I wish I had in retrospect. I mainly drew comics to keep up and bond with my older brother, who was much more of a natural cartoonist than I was.

The idea of being a cartoonist was an appealing one to me as a kid, though not as appealing as being a rock star or baseball player.

A half-page "Junior" strip that I sold to HIGH TIMES magazine back in 1980 or ’81. They had a comic section of sorts back then, and their art director liked my work.

3. Your most famous creation is Buddy Bradley and the Bradley family. The Bradleys first appeared in WEIRDO and then NEAT STUFF, published in the 1980s by Fantagraphics. Later, Buddy starred in his own book, HATE. Can you tell us the story behind this wonderfully dysfunctional family, and to what extent is Buddy Bradley autobiographical?

Me, my wife Joanne and our old roommate, David, used to sit around and draw comics to amuse each other back in the late 1970s/early '80s. I drew a one-page strip called "Meet the Bradleys," where I presented a family similar to my own, only presented them as if they were the Brady Bunch. I so amused myself with this idea that I did more strips about them. Seeing how Buddy was the most autobiographical of them all, he eventually took over.

4. You’re a frequent contributor to MAD magazine. How did you become one of the "Usual Gang of Idiots"?

The art director, Sam Viviano, is an old acquaintance of mine. He started offering me work about five-to-ten years ago. The editorial staff has never offered me any work, however, which is why I've only drawn for them and never written anything for them.

The Bat Boy strips were the most fun of the bunch, since I was given total creative freedom by the WEEKLY WORLD NEWS editors and took full advantage of it by thoroughly indulging myself. There’s nothing the least bit memorable or profound about those strips, but I liked the way they turned out regardless. I'm particularly happy with my art on them.

The REASON work was the most exhausting of them all, since I was reporting and opinionating on important issues, so it was vital for me to keep my facts straight and express myself as concisely as possible. A tall order!

6. Of all your characters, who’s your favorite? Who can’t you stand?

Out of the HATE cast, my favorite is Lisa. She's very complex, yet there's a consistency to her inconsistency. She's also the most unpredictable of the bunch.

Out of all my non-HATE characters, I'm most proud of the cast of SWEATSHOP, a title I created for DC that was cancelled way too soon. I had many, many more ideas for them.I always "hated" Junior, but then he was designed to be loathsome. At the time I created him, he represented everything I disliked about myself, and I drew him in part to "exorcise" him from me!

7. What’s the future of alternative comics?

Graphic Novels, obviously. Changes in the market and in distribution has suddenly turned every single cartoonist into a novelist!

8. Name five of your favorite comic strips/comic books or cartoonists.

9. Who’s hotter, the mom in FAMILY CIRCUS or the mom in DENNIS THE MENACE?

Dennis' mom. What are you, blind?!

When coming up with a character, drawings first. For story ideas, words first.

No. GOOD ideas, maybe, but I always have lots of story and project ideas.

12. Who do you want to play Buddy in the inevitable HATE live-action film?

It totally depends on what their input is, but less input is always better than too much.

Gah! Too many to list, and my "favorites" change all the time. If I did make a list, I'm sure most of it would still be from the late sixties and early ’70s (my "formative years").

Working at home, plus the low overhead.

I was working with Crumb when I first met him. That was the only time I was nervous. I also was too shy to say anything to Don Martin when I met him.

Be patient, persistent and true to yourself.

They aren't important at all. They're obnoxious distractions that divide people into "winners" and "losers" for the most arbitrary and subjective of reasons, depending on how in vogue your work is at any given moment. I also think they encourage young artists to create a certain type of work that they might not create otherwise, in the hopes of winning one.

I'm wearing a green T-shirt that says "Capitalist Pig" on it at the moment -- something I'd never wear in public!
Posted by Scott Nickel at 11:59 AM