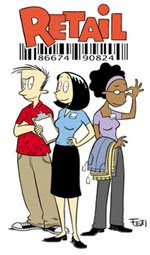 In a new twice-weekly feature, A Nickel's Worth interviews cartoonists from syndication, gag cartooning, comic books and the web.

Up first is Norm Feuti, creator of the internationally syndicated comic strip, RETAIL, and the web comic, GILL.

Norm is a triple-threat: funny, prolific, and the guy can really draw. I hear he also makes a killer macaroni salad (the secret is the sweet relish).

Check out all the comic goodness at Norm's website, including the book, Pretending You Care (available through Amazon) and the recently published collection of GILL comics.

Thanks again to Norm for being my guinea pig.

I always liked to draw. The first time I recall wanting to be a cartoonist was after I read through a copy of Berke Breathed's first BLOOM COUNTY collection "Loose Tails." My mom's boyfriend gifted it to me when I was 12. It was my introduction to comic strips.

When my wife nudged me to actually make an effort to get syndicated back in 2000, I sent the first version of RETAIL out to the syndicates and was contacted by Tribune Media Services. They paid me $300 to run the submission on a website they had at the time called "Comics Edge"— sort of a virtual testing ground for strips they were considering for development.

Nothing came of it, but that was the first time I was ever paid for my cartoons.

3. Describe the process you went through to get RETAIL syndicated.

As I mentioned, my first attempt at getting a comic strip syndicated was in 2000 with a strip called RETAIL. This was a much different strip than the current version. It centered around the employees of a fictitious mall gift store called "World of Wonder." The store was a carbon copy of all those pseudo-educational/intellectual gift shops like "World of Science," "Learningsmith," and "Natural Wonders," that were ubiquitous to every suburban mall in the late 90s.

I sent this first version of RETAIL to most of the major syndicates and got a form rejection letter from all but two of them – Tribune Media Services, and King Features. As was typical of his generosity, Jay Kennedy sent me a rejection letter, but expressed interest in the premise of a retail-based strip and took the time to write some tips on how I could make the strip better. At the same time, TMS contacted me by phone and wanted to showcase my submission as it was on their "Comics Edge" website. For reasons I can’t recall, they wanted me to change the title to WORLD OF WONDER, which I did. They ran it on their website, then sent me a rejection letter several months later. They offered no critique. They simply said thanks, but no thanks.

For some crazy reason, I decided to take my next submission in an entirely different direction. My first idea for a comic strip elicited interest from two major syndicates simultaneously, but in my infinite wisdom, I decided the idea was dead in the water and decided to move on to something else…brilliant.

My next strip submission was a collaborative effort called BRAVE NEW SCHOOL. A friend of mine who is a brilliant writer and schoolteacher wrote the strip, and I did the artwork. It focused on the staff of a typically under-funded American elementary school. I liked this submission because it had a lot of heart and truth in it. Alas the syndicates weren’t interested.

My next submission was called COSMO. It was a strip that focused on the life of a freelance artist, his wacky best friend and his girlfriend. This strip was fun, but most noteworthy for the fact that it got the ball rolling on RETAIL again. Because I had no art credentials, I started including my short stint on the TMS website in my resume to beef it up. Once again, Jay Kennedy wrote me a letter. While he didn’t think the concept of COSMO was engaging enough to sell, he noted that he would be very interested to see me revisit the RETAIL concept in a future submission.

By the time I had received this letter from Jay, I had already finished another strip idea called ORIGAMI MAN, but I put the finishing touches on hold to come up with a new version of RETAIL as fast as I could. This second version of RETAIL was closer to the current version, but still different in many ways. When I finished it, I sent out RETAIL and ORIGAMI MAN simultaneously. By this time it was early 2005.

This new version of RETAIL prompted a phone call from Jay, who wanted to see the idea tweaked further. I took his advice and sent him a third version of RETAIL, which he was impressed enough with to offer me a contract.

I spent the next several months writing more strips and working with Jay Kennedy and Brendan Burford to put together a sales kit, and RETAIL finally launched on January 1st 2006.

4. Why did you start GILL, your second strip?

Newspapers are in a downward spiral. Whether they will ultimately survive in some form is open to debate, but I think everyone in the industry pretty much agrees that they can no longer be relied upon as the only way for a cartoonist to make money. When even the most amazingly talented cartoonists to launch in the last few years (Richard Thompson of CUL DE SAC fame comes to mind) can only get into 300 or so papers, you know the industry is hurting.

I'm not convinced that the web model of selling your own books and T-shirts online is the best solution, but it's a start. More and more cartoonists are making it work and making a good living at it. Until something better comes along, I don't see much of an alternative for making money off of the comic strip format we all know and love.

I've only had one strip outright rejected, so it's my favorite by default. Here it is:

I think the debate that usually occurs online is stupid. We're all cartoonists and we're all trying to figure out what to do in the age of the Internet, bickering over who does it better is just dumb.

The attitude of any starting cartoonist should be to attempt making money from their work in as many different ways as possible. No one will argue that putting all your eggs in the "print" basket is a bad idea, but abandoning it completely isn't wise either. There's still money to be made there. Probably always will be.

I welcome the challenge in some ways, resent it in others. It's much harder to write funny material that is also sanitary, so the challenge makes you a better writer I think. Writing "blue" is a lot easier.

The overly sensitive standards of newspapers do need to be loosened up, though. While I certainly understand the utility of insisting on clean material for newspaper comics, the standards of most publications have become absurd. You could write edgier material in the 50s than you can today.

I'll include only current strips rather than name the same 5 best strips of all time that everyone does. It's hard to name just 5, but here are a few.

I draw on Strathmore 300 or 400 series smooth Bristol. I use a Kuretake brush pen, and Rapidographs. I use Micron pens on occasion as well.

Working from home and making your own hours.

The most famous cartoonists I've ever met were all at the last NCS Reuben Awards. It was the first one I've ever attended. I said hello to Scott Adams and Bill Amend. And by "said hello," I mean just that. I said hello and shook their hand in passing, but didn't really have a chance to talk to them. I spoke briefly to Jim Borgman. I even spoke to Jean Schulz for a minute or two.

The Reubens were a lot of fun. It was cool just to be in the same room with those people.

Diversify. Explore every possible avenue for monetizing your work.

If I ever receive one, I'll think they're very important. Until then, they don't matter.

My mom signed me up for a gymnastics class when I was 8. We wore matching red outfits and did a routine to the song "Macho Man" by the Village People. The scars may never heal.

I think Toby McGuire would be a great Cooper!